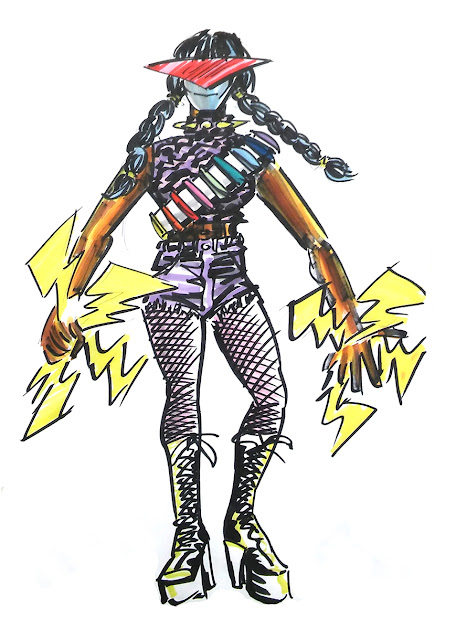 Jasmin's character is the end of the demo... 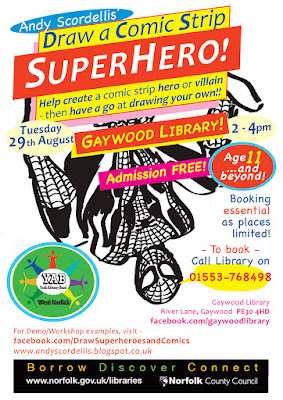 ...this poster is the beginning... 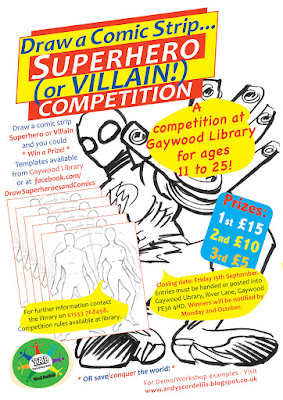 And now - The Middle! 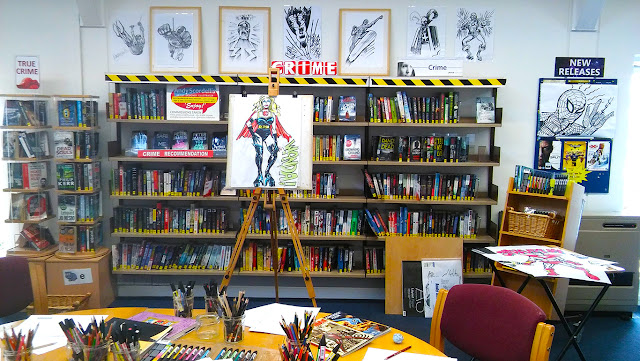 After a busy bank holiday weekend - (we had visitors from a county far far away - deepest brightest Surrey) - I was rather tired, and probably did not have as much do-a-demo energy than I hoped to have. But I felt that the spark of comic book creativity was strong in King's Lynn. 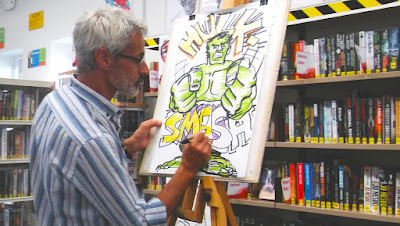 I wasn't wrong. No sooner had I arrived at Gaywood Library and set up a comic friendly zone in the area they had allocated to me, than young Logan took an impromptu seat at the comic round table and quickly coloured in an image of the Hulk on a template sheet! 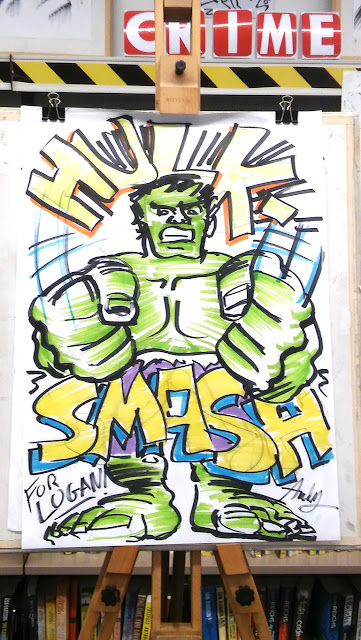 The demo was to start in 30 minutes, but seeing Logan at work I was bitten by the bullpen bug and commenced drawing his favourite superhero for him - ol' Greenskin himself, and thanks to Logan for providing the Hulk's own deathless dialogue - "Hulk Smash!" - what else? 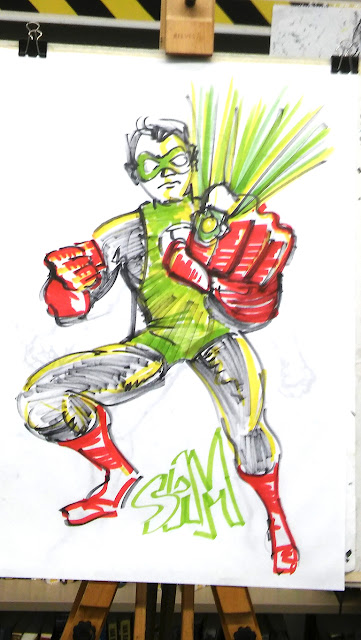 Sam and his brother Thomas also arrived a little early for the demo, but just in time for Sam to ask me to draw the Silver Age Green Lantern - off template and with red gloves and boots - but still in brightest day and blackest night! 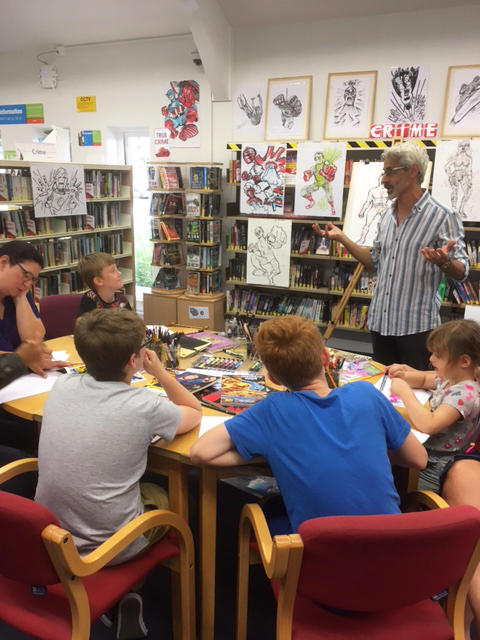 Ok - we've got a group of comic creatives raring to go - we agreed to go 'round the table with each person to suggest a costume design element. Sam at 5 o'clock wanted us to start with the mask, but boots at 7 o'clock got the thumbs up. Imogen suggested reeeally long boots. With spikes on a spiral - and we're off!

In the meantime Thomas asks if I could show him how to draw Cyclops visor. This is more like it - when I was at school all our queries were about algebra, history and french.  CRZZZ! 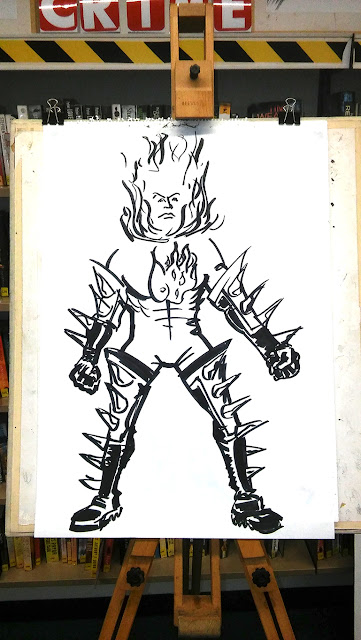 Travelling clockwise - Tom asks to keep the gloves consistent with the boots - long and spikey; Thomas wants an elemental chest emblem - water and fire; Sam interjects that a detached head floating in a ball of fire - "Dormammu!" yells Thomas. (I'm thinking - 'How do these kids know who Dormammu is?' and then I remember Hollywood!) Jasmin and her mum prefer no trunks, a blank torso, thighs and shoulders!
Sam insists again for a detached head floating in a ball of flame. I'm still trying to figure out what to draw next. No neck! says Sam.

Phew! We're coming back for colour.


In the meantime, while I'm co-creating, they're creating their own characters!

It's time for Imogen to leave, and while the guys are busy designing the new age of comics, Jasmin steps up to the marvel spotlight and she and mum envision a new hero or villain - can't say at this point. But we start with power!

Outstretched arms - hands holding high voltage lightning bolts!! Back to base with shiny high laced boots, denim cut off shorts and fish nets; Sam wants a mask again - Jasmin is thinking visor - there's a discussion with mum - we're holding off on the visor. 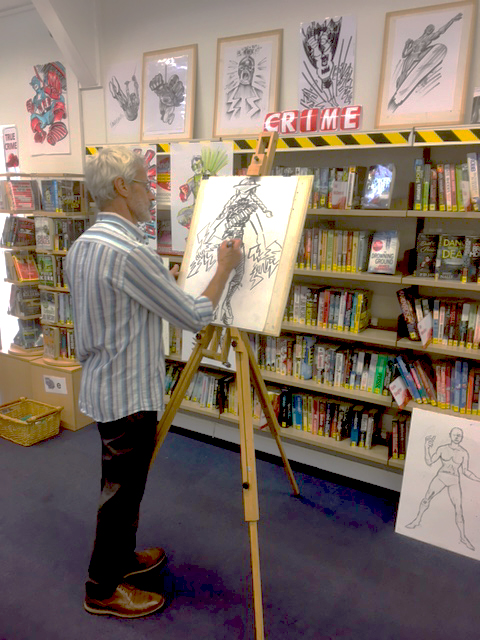 We're going for a chest bullet belt and camo crop top with turtle neck doubling as spiked choker! There's a natural shuffling of personnel - Sam at 5 sits where Imogen sat at 7, and Nikita takes Sam's place.

I've no idea what the time is - but it's never too late to create! 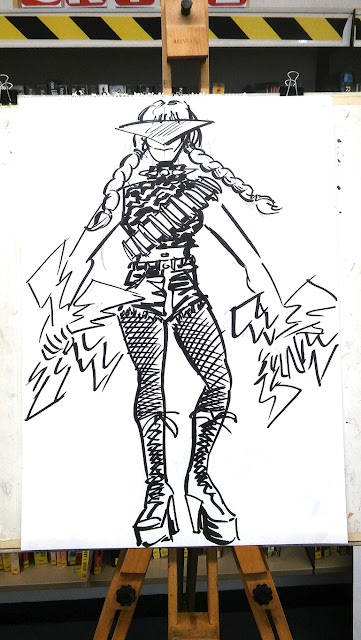 The super angular visor is in, and graphic black bob is out. Face is out - featureless mask and massive plats in. No name, no mission, no problem!


A big thank you to Nikita who stepped up to the easel and drew a blockbusting version of Big Hero 6's Baymar - well done! (And thanks also to Nikita's dad - a big Watchmen and Sandman fan - for showing me his very own Dr Manhattan!)

Before we got down to playing Dr Spectrum with the colours, Sam asked for a 'quick sketch' of Daredevil. I started with the feet and just worked my way back, couldn't see where I was going...


Hope this is OK Sam 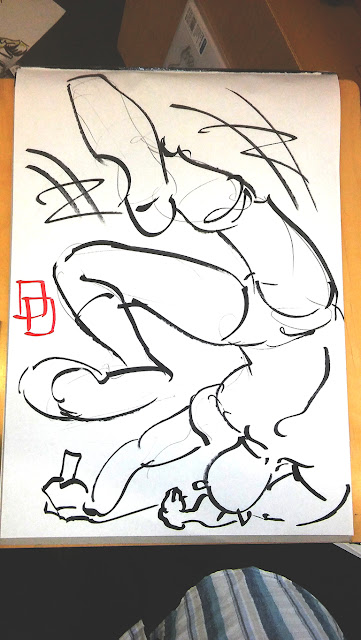 Having recently purchased a veritable arsenal of Winsor & Newton Promarker colours, I was armed and - maybe not dangerous - but certainly ready, to colour in those newly created characters.

So without further adeu - here's Elemental Man! (Well, it's not so bad. Thomas wanted 'Dorspiku!) 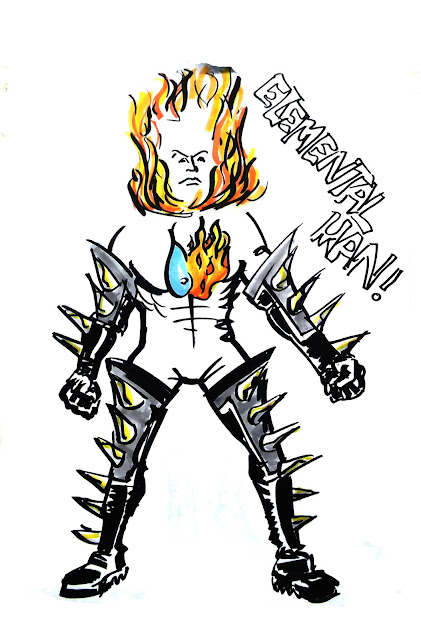 Apologies to all for not having time to discuss, list and compare all the characters that I had in my display today - particularly to Thomas who was unsure whether the Silver Surfer was a villain or hero.

Before I could say that while the Silver Surfer was not a villain as such, being the herald of the planet devouring Galactus he would by no means have been viewed as a hero when he first appeared. Thomas mentioned that the Surfer was indeed a villain when he was in the thrall of Thanos!

...and coincidentally,
Fantastic Four #48 was the issue featuring the first appearance of both the Silver Surfer and Galactus! 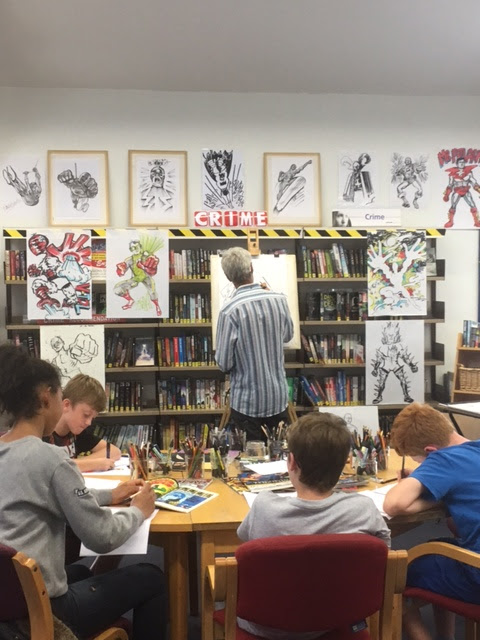 I didn't realise it until I got home and uploaded the photos I had
taken, and sure - I knew that of all the genres the workshop could
have been placed in, we were in the 'Crime' section.

But it was only later I noticed the very much more than
appropriate placement of the character sketches! 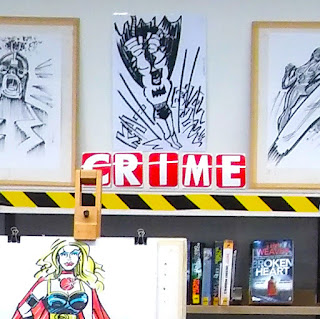 A big thank you to Elena for organising the workshop event in conjunction
with Richard of the Youth Advisory Board and Norfolk County Council.

A Galactus-size thank you to Imogen, Tom, Thomas, Jasmin, Sam and Nikita
for taking part and creating a new universe of Super Heroes and  Villains!

And a Hulk-sized thank you to Logan for starting us all off so well!!


Posted by Andy Scordellis at 07:50 No comments: 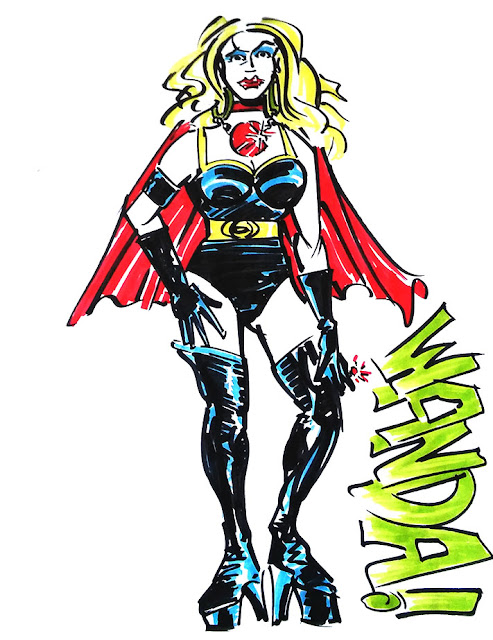 'Wednesday Yes. Morning no...
1 o'clock as the Stroke Association begins
Listening to suggestions - I know they'll say more
I go up to the easel clutching the marker pen
Quietly colouring the costume in
Stepping off the page she is free'

Sorry about that - I listened to Sgt Pepper the other day and
cannot say 'Wednesday' without a blast of lyrics.

Anyway - within my workshops at the Downham Market Stroke Association...

...done Half Life and Still Life - 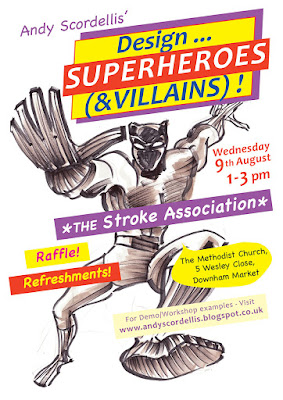 I'd been threatening to hold a Superhero Demo/Workshop from the beginning.

Just to get us all in the zone I brought a healthy dose of comic books and graphic novels, and for good measure a display of superhero sketches and demo designs.

I divided the members into two groups, and Chris on the left cheerily volunteered himself and his side, as the more villainous of the two; and by default on the side of right were Joanne, Logan and all those - on my right!

It seems while I was easel-eyed and busily responding to heroic sartorial suggestions from all and sundry, the group was busily creating,
sketching and colouring their own comic characters. 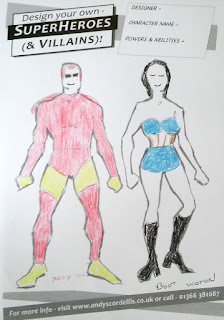 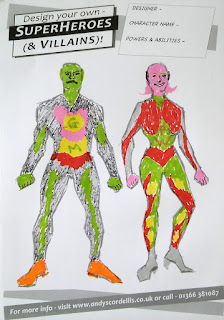 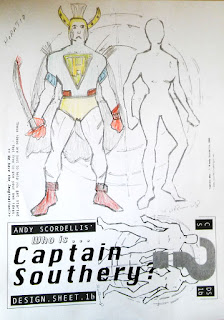 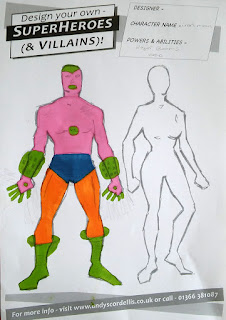 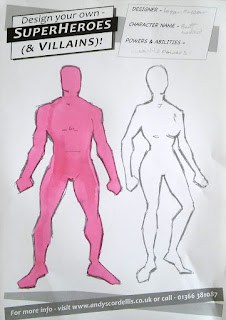 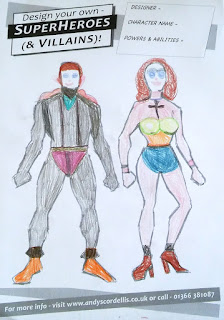 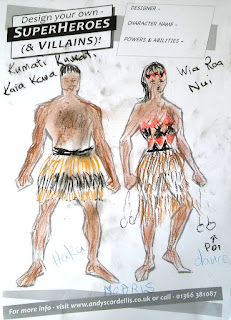 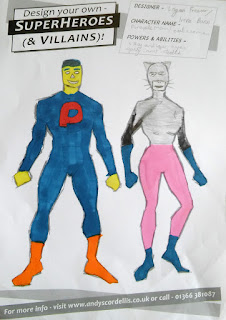 Thanks to Paddy, Logan, Joanne, Chris, Jean and all the heroic hecklers that contributed ideas - it wasn't long before we not only had two dynamic new additions to the pantheon of heroism and villainy - in the name of Horatio and Wanda - but also a bakers dozen of brand new super characters to give any Legion of Superheroes a run for their 30th Century credits!

Additional thanks to Paddy for suggesting hero Horatio's appearance might
be further enhanced by the inclusion of a scimitar style machete - and
would I please not forget to add the dripping blood. In colour. 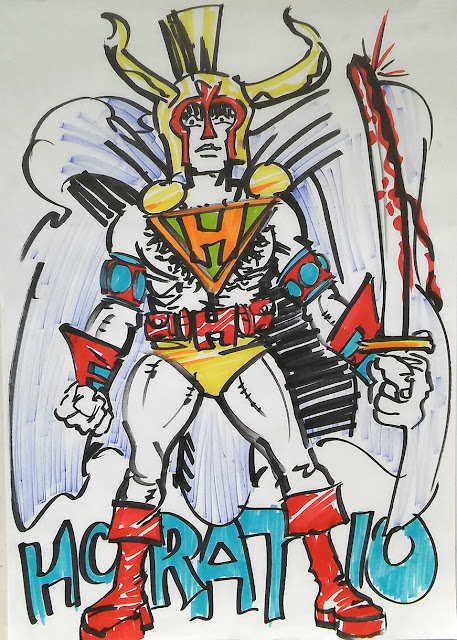 Posted by Andy Scordellis at 07:21 No comments: