Wow - I thought getting up at 8am to get a space opposite Downham Market Railway Station to draw the station was good timing - boy was I wrong!

I returned the next day at 6am! Pitch black, parked directly opposite and promptly slept for two hours. I awoke at 8am ready and raring to go - well, not quite. Bought a hot coffee from the cafe returned to the car and drawing board balanced on the steering wheel - began drawing.

After a few hours of diligent drawing, it did not seem to be going as well as I'd hoped - my  station appeared to have a life and proportions of it's own, but of course I carried on with it anyway...


When I returned to the studio to complete the work from photo reference I could see that I had exaggerated certain architectural features and not other's. My first instinct then was to correct it, but quickly thought to go with it - it did after all have a certain charm...it became a very popular pen & ink rendition of the station.

As it happens, several months later while exhibiting it in the Downham Market May Festival exhibition, the picture was purchased by Andrew Archibald, the chap who had been responsible for the Award-Winning conversion of Downham's station as featured in the TV series by Michael Portillo.


He subsequently commissioned me to draw the station's King's Cross platform and also the olde Signal Box - Andrew, not Michael Portillo.

Posted by Andy Scordellis at 04:15 No comments: 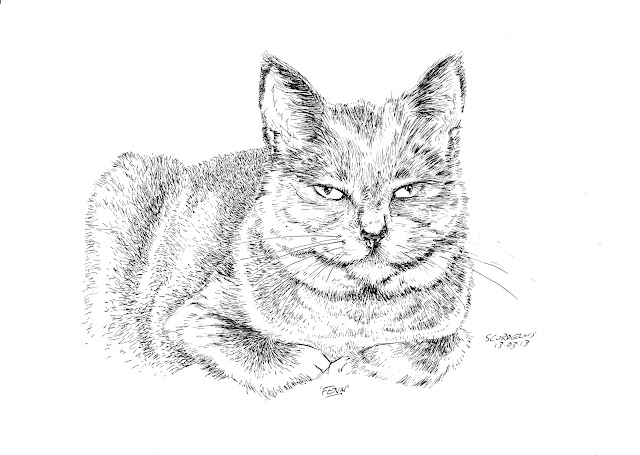 Posted by Andy Scordellis at 07:41 No comments:

I just love this drawing.


My son Laz and I belong to the King's Lynn St Michael's Rifle and Pistol Club - more likely Laz is a fully functioning member, and I tag along as the responsible adult that I am.

Fellow member, all round nice guy and mentor in the ways of target shooting - Roger Hack, having learnt that I drew pictures and not pistols for a living, asked if I would produce a drawing of his dog 'Pepsi'.

Roger explained that 'Pepsi' had recently passed away, but what a great companion she had been!

Pepsi had been the runt of the litter - naturally Roger took her home. 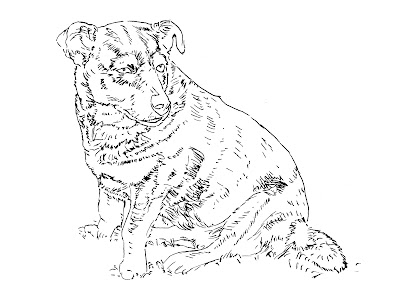 The smallest dog with out-turned 'gotty' legs grew into a Ratter Extraordinaire! Stalking the sugar beet fields to the rear of the garden and generally keeping sway over the considerable rat population without batting a furry eyelid.

In later years the rats enjoyed a reprieve of sorts while Pepsi favoured her spot beneath the garden's sun-dappled apple tree, keeping a watchful eye on the comings and going of the local cat population.

I do seem to be more of a cat drawing person, but what a pleasure it was drawing 'Pepsi'!

Many thanks Roger for the opportunity to draw a great commission.

The nature of this commission and the style of the finished artwork couldn't help but remind of a the old Dandy comic strip 'Black Bob' which featured the ongoing adventures of sheep dog Bob, drawn by the inimitable Jack Prout.

Wow, it appears that this guy could draw anything - great stuff!

Posted by Andy Scordellis at 05:10 No comments:


Plans are now underway, and have been for a few months truth be told, for next years Downham Market 2014 Calendar.

Several drawings and illustrations are already in place - more than likely I'll put it to the public vote which Downham shops or buildings to include.

We'll arrange for the voting to take place - either with me on the market, in selected stores, or online via email or blog - in such a way that we can collect contact details which can then be entered into a draw - no pun intended - and the winners to be drawn from a hat/bowl/box with prizes of original artwork, commissions, card collections and signed prints in the offing!

Let's have some fun with it.

Also the idea of extending the calendar to accommodate Kings Lynn has been percolating in my head for a few weeks which would allow greater scope for illustration and a broader window for sales - which should result in greater charity money raised.

As decisions are made and plans crystallized I'll let you know what we're up to and how to vote.


Posted by Andy Scordellis at 02:52 No comments:

Email ThisBlogThis!Share to TwitterShare to FacebookShare to Pinterest
Labels: Downham Market and Kings Lynn 2014 Calendar Denver Stores Our Lady of the Mount 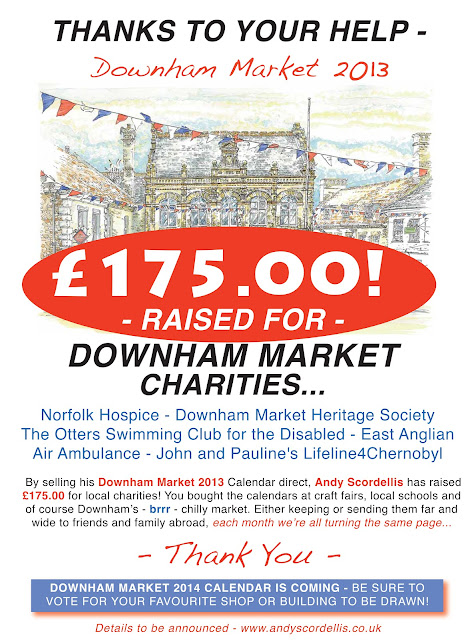 I must say, a few months after the act as it were - of selling calendars that is - I've thrown in the proverbial towel and totted up the monies raised for charity.

I figure now is a good time, not premature or anything, because it's fair to say that if you haven't bought a Downham Market 2013 Calendar by now, you've probably got one, got two, or don't want one.

The grand total of £175.00 has been raised and will be shared equally amongst the five chosen charities at £35.00 each - not loads of money now that the maths has been done, but as that well known TV advert says - 'Every little bit helps!'

A big thank you to all of you who have supported me and the charities by virtue of buying one two three or four calendars - keeping them or sending them every which way north south east and where ever you fancy!

Next year's calendar is underway and the best is yet to come - or as good as anyway!

Posted by Andy Scordellis at 01:35 No comments:

Email ThisBlogThis!Share to TwitterShare to FacebookShare to Pinterest
Labels: £175.00 raised for Downham Market charities Thank You

...to Russia and Singapore and New Zealand and Australia with love...


As I turned my own Downham Market Calendar over from the last day of cold February - already?! - to the first day of March, I couldn't help but think of all the echoes of that action, as those four hundred or so recipients of the calendar either from friends and family, or themselves - turned over one page to another to welcome the month of March into the New Year.

...with the pictorial help of Downham Market's station platform heading to Kings Lynn, London and all imaginable points beyond...


It was illuminating to hear, selling in November directly as I was on the town square - clad in multi layers and on one occasion even a hot water bottle - I was Huge! - that I was kindly informed by each buyer in turn that this particular calendar was being sent to Australia or Paris, or this calendar to Germany or Singapore...

you know geography has never been my strong point - where is Ostend? - and I can't remember all the close to home and far and away places the calendar arrived at, but even this side of New Year's Eve people approach me in the market square on Friday's, or any day in town and tell me their calendar went to this or that relative here or there.


One lady told me she'd often sent gifts and such to her son abroad but had never received a response, on this occasion he telephoned her to thank her for the calendar.

Perhaps the strangest and most unexpected of destinations that I've almost forgotten is when a chap made a beeline for me on the market square - weaving around the plant man's patch and the Eggman (we have no names on the market, only the most obvious of labels) - stopped momentarily at my stall and informed me that he had sent a calendar to his brother in - of all places - Botswana!

Last week he mentioned that his brother was coming over soon and that as the artist of his calendar - he would introduce me to him.

As it happens I'm not on the town square today...but what a lovely compliment.

It's fair to say that Downham Market's 2013 calendar as well as being a collection of hand drawn local scenes, is also a pictorial reminder of distant friends and family, a nostalgic trip down memory lane, and perhaps most warmly - for those far and worldwide - a glimpse of home.


Posted by Andy Scordellis at 02:47 No comments: