...The Incredible Dennis and Wolverine Beryl!...


The time: 1.30pm
The place: Downham Market Library...
The mission (should you accept): Who are Dennis and Beryl? 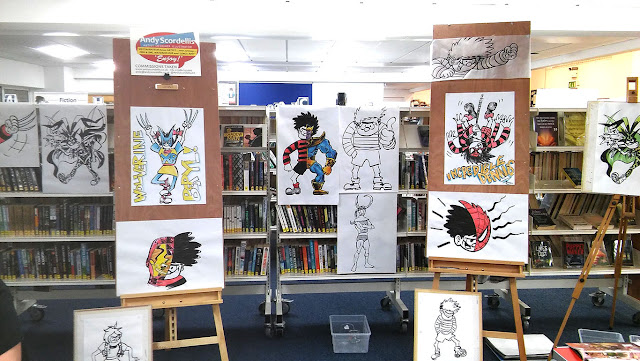 I started the workshop taking suggestion from the group on how to draw Dennis and Beryl. I sketched in a pencil layout and went back in with Posca pens and Promarkers. In an effort to draw quickly - I think Dennis came out a little looser than I expected. 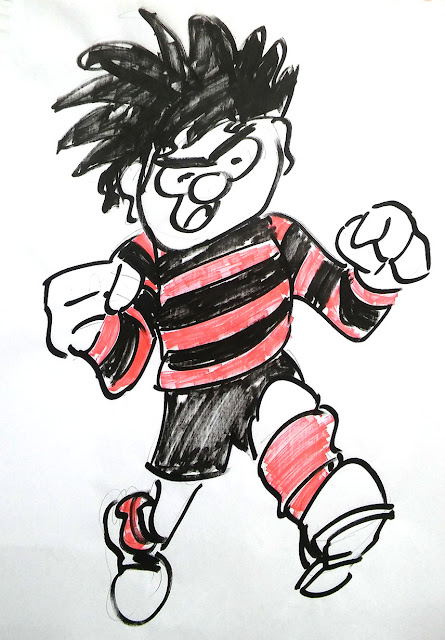 While Dennis appeared in a traditional 'running at you' pose, I drew Beryl as if she might be riding a skateboard... 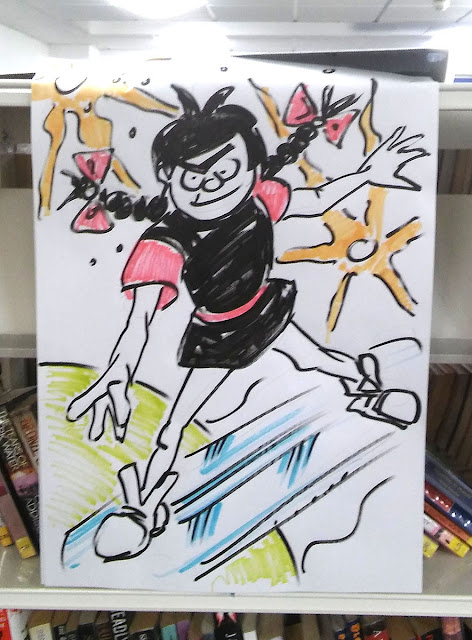 Sure - it could have been a skate board. Or a train, or a rocket ship, or a tiger. After much deliberation - we chose the Silver Surfer's intergalactic surfboard! What else?

Just to place Beryl in context, I added blazing suns and stars above and the planet Earth below. Makes a change from Dundee.

While I was working on the easel I could hear the sound of pencil and marker on paper. The kids had wisely begun drawing and colouring their own versions of Dennis and Beryl using the template sheets I designed. Which is just as well since it was taking me longer than I thought to carry out these first two 'quick sketches'. 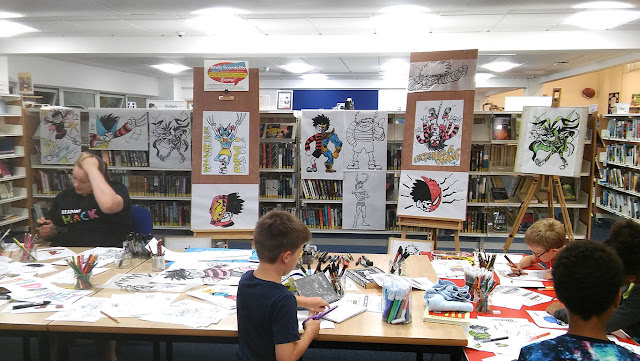 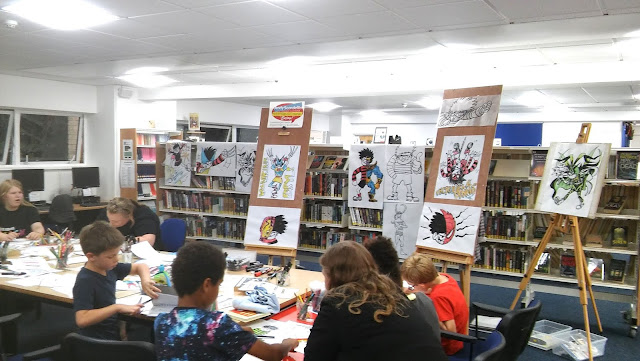 I was a comic fan from the early 60s, so for me there was no getting away from Superheroes and Supervillains while I was planning this workshop. I produced some examples of Dennis and Beryl as Marvel characters, and for the second set of drawings, asked the children which hero or villain they would like me to combine with Dennis and Beryl. 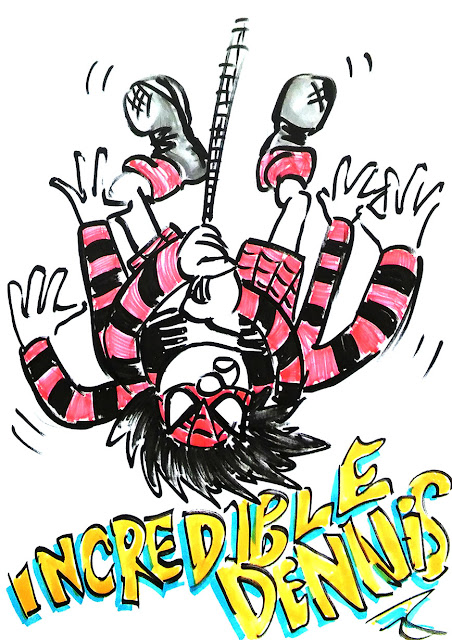 Michael - I think - suggested Venom, and/or Spider-Man for Dennis. Since Spider-Man is like no other character, and can stick to walls and contort, well - like a spider, we drew him upside down. I remembered an old Spider-Man story where he actually grew four more arms, so Dennis was voted to have a total of eight limbs! Swinging on a web wearing half a Spidey mask - he's your friendly neighbourhood Incredible Dennis! 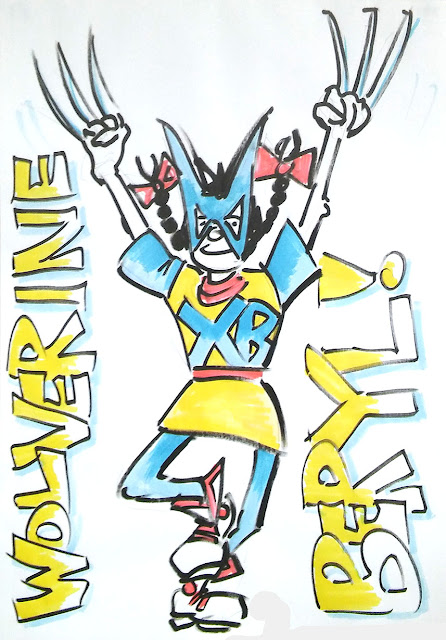 I may be mistaken, but I think Dexter suggested drawing Beryl with Wolverine claws.  She is wearing a customised Weapon X version of her traditional skirt and short sleeves in the style of Wolverine's original yellow and blue costume. 'Course we need to come up with a name - an 'XB' chest logo for 'X-Men Beryl' - and a text logo for 'Wolverine Beryl' - watch out Korky the Kat and the Bash Street Kids!

While all this creativity was going on parent and volunteer alike were joining in and contributing their own ideas to the afternoon's imagineering!

I shouldn't be surprised, but while discussing the various incarnations of Iron Man's armour, and the different colours of the Hulk - turns out Michael and Dexter knew as much if not more than I did! Thank you Stan Lee and Dorling Kindersley.

So somehow, this brought us around to talking about the world devouring GALACTUS! We started the workshop with the Sensational Beryl - Sentinel of the Spaceways! and toward the end of the workshop have come full circle to Dennis as we've never seen him before - the rather peckish GALACDENNIS! 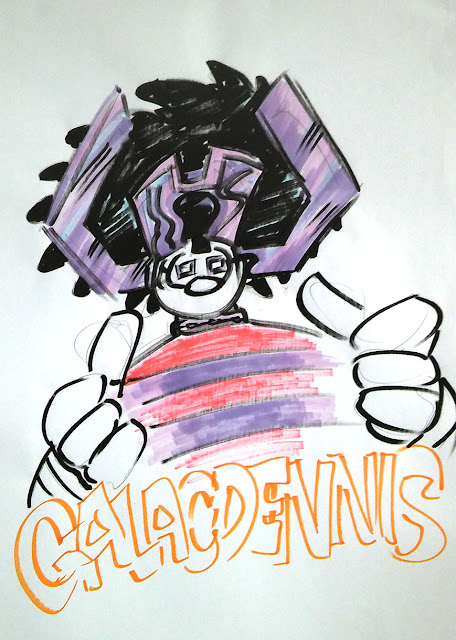 I'm going to apologies beforehand, but I've got a terrible memory for names (unless they're comic book writers, artists, inkers, letterers and colourists).

When I was in the restaurant business it would be 'Well-done Steak Guy' 'Pina Colada Woman' 'Two jugs of Bud Man' and 'Quadruple Burger Kid'.

So...
A big thank you to Fran, Stephanie and all the volunteers (Aimee, Tasha and 'Ant Man and the Wasp reading Guy') at Downham Market Library. 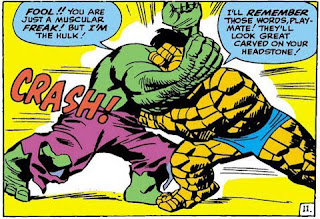 Artists and creators - Michael, Amy, Alex, Dexter, Martha, Amy...and that's where I can remember who drew Fantastic Four #25 in 1964, but can't remember who I spoke to yesterday.

Apologies to you if I left you out - contact me and I'll add you asap.
Many thanks to you all, kids and parents - for coming along!

OK - just when you thought it was safe to
go out into the fifth quadrant of the galaxy -
Where'd this guy come from?! 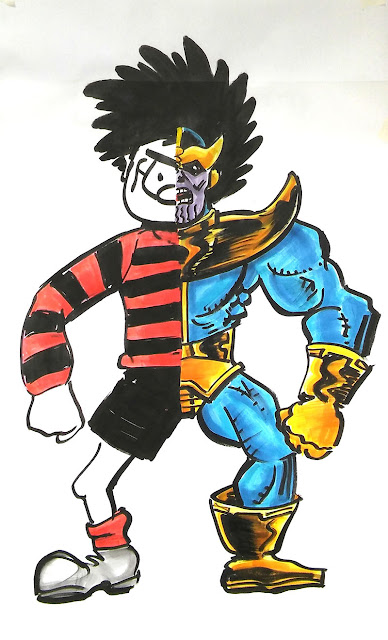 Dad! Have you seen
my Infinity Stones?

...and a library far far away!

Posted by Andy Scordellis at 08:38 No comments: 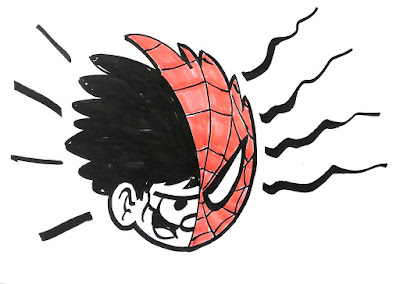 Having previously carried out superhero themed Demos and Workshops in Norfolk libraries, when I was asked to hold another series of workshops,  I naturally assumed it would be more of the same - Comics and Superheroes!

I was almost right.

Utilising a character I had not seen for quite a few years, The Reading Agency and Libraries were presenting a 'Mischief Makers Summer Reading Challenge' - all summer long!

That character wasn't Spider-Man, Wolverine or Gamora - the most dangerous woman in the galaxy.

None other than probably the very first mischief maker we all read about - Dennis the Menace! 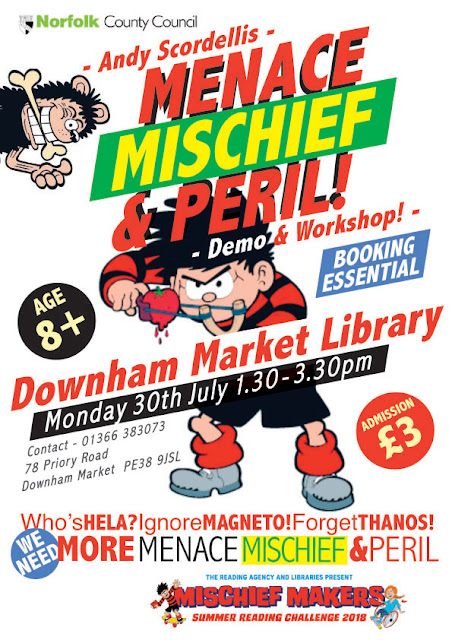 No superheroes? I was floundering. Ok - while designing the poster a 'modern day' mischief maker came to mind. Norse mythology's Loki God of Mischief.   Or more accurately Marvel Comics Loki - as seen in the early 1960s and the current Marvel films. Yep - Loki's a real mischief maker. 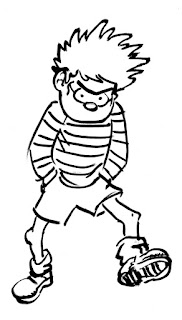 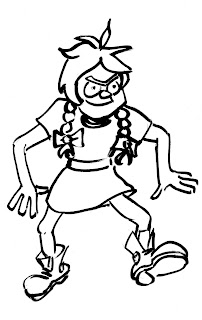 And if Dennis and Loki were on board - we couldn't leave out the most dangerous girl in The Dandy - Beryl the Peril! 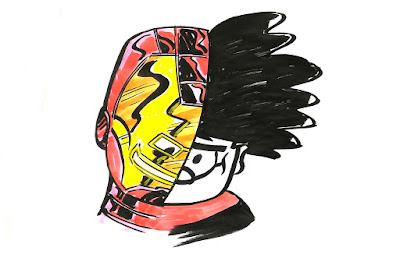 In order to familiarise myself with the characters I drew/copied a few sketches, and one thing lead to another. I started drawing combinations of Dennis and Beryl with various Marvel characters. 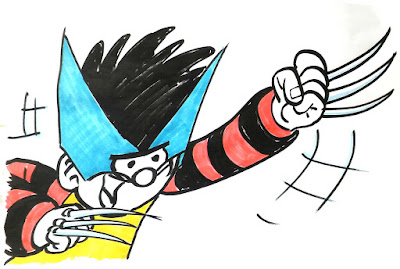 Ok - I'd combined Dennis with Spider-Man, Iron Man and Wolverine.  Having seen 'Thor - Ragnarok' not so long ago, Beryl could only be - Hela! 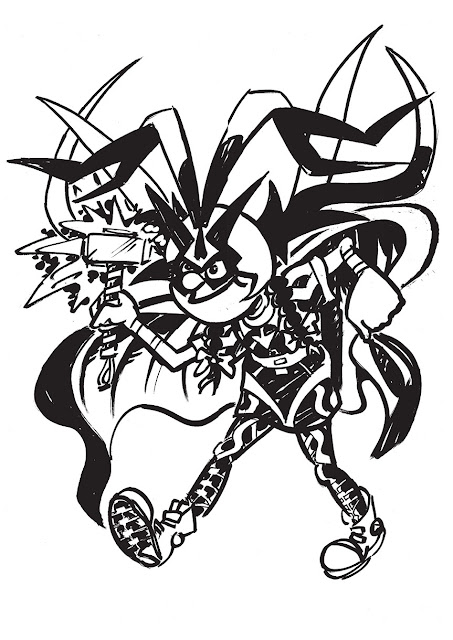 And I returned to Dennis with the aforementioned Lord of Titan - THANOS! Well, half of him anyway... 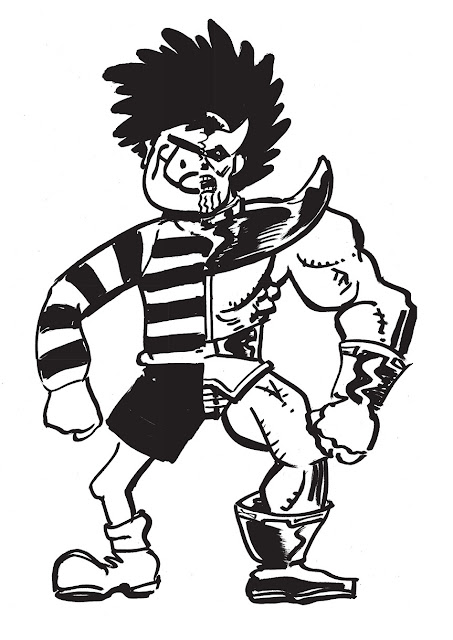 Hmm, I was getting carried away. Once we'd all drawn Dennis and Beryl a few times - What Next?!

To keep it interesting - I had to ask a few questions... 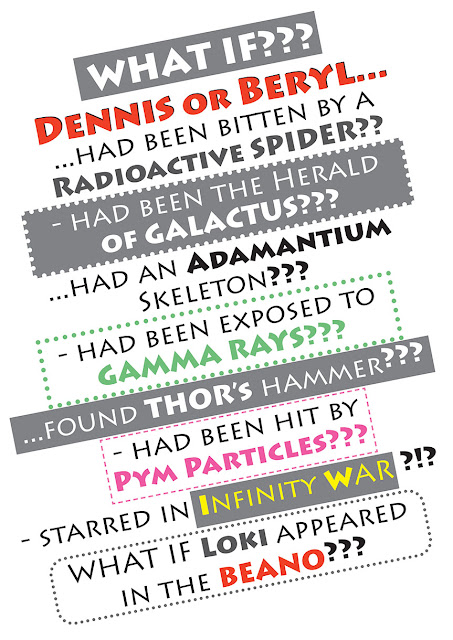 Posted by Andy Scordellis at 06:58 No comments: