When John Jaworski left me a telephone message offering me a commission and apologised for calling me out of the blue as it were - I called him back accepting the commission, little realising that it would soon be I apologising to him for taking so long to get it done. 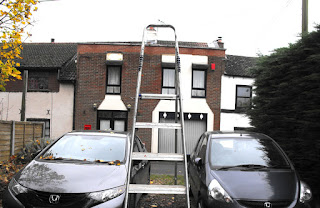 Before I got started, I needed to get plenty of reference photos, which is normal practice, even if I'm working on site from life to some extent. On this occasion there was another proviso. To achieve the point of view that would best present the multiple rooves of Moot Point, would I take a photo from a raised perspective?

OK, I'm not the fastest artist in town, but in consideration of other commitments, I would expect to allocate a period of three to four weeks to complete an A3 pen & ink and watercolour commission.


Owing to circumstances beyond my control I was unable to apply myself to the commission as often as I would like to have. John and Frances were both absolutely fine with this, and allowed me as much time as was needed. To quote John as he relayed it to me -

I found although I had plenty of reference photos, there were occasionally some details that were unclear from those pictures, and rather than - dare I say - 'guess' I would drive out to Moot Point to take additional photos or to count the roof tiles...


...or check the colour of the downpipe of the adjoining building to the left, or to clarify whether the window and door frames were in fact black, brown or really dark navy blue...

Many thanks to John and Frances, both for the commission in the first place and their hospitality and patience during it's execution and completion.

Posted by Andy Scordellis at 10:59 No comments:


Returning to Tindalls after lunch, I sketched a few Marvel characters.

It's great fun, I don't really have a clue what I'm going to draw - just think of  a character and go for it. I give myself five minutes or so from blank page to finished article.

Even if it's a little bit off, I feel the vitality of the drawing makes up for it.
Well, that's my excuse...

I started with the foreground hand and claws and worked my way back from there...

The enigmatic leader of the Inhumans is all about silence -
until he speaks - and then it's all sonic chaos!

A quick sketch of the one and only 'masked' Dr Strange by Doc Team Supreme - Gene Colan and Tom Palmer with that great exaggerated cloak and collar!

OK - this was actually my first sketch - you can see it's a bit wobbly, but you get the general idea. Gotta confront that blank sheet of paper with brave enthusiasm and go for it! Start somewhere... 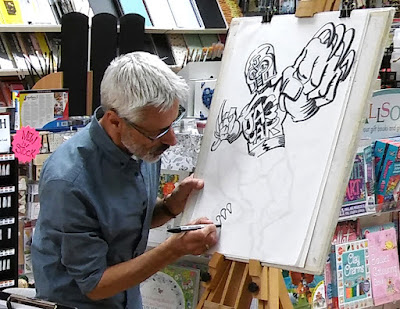 
Posted by Andy Scordellis at 07:29 No comments:

Driving into Ely this sunlit Saturday morning to take part in TINDALLS Three Artists' Workshop weekend, I knew it was going to be a good day. I'm not sure when I realised this, probably not when I was stuck behind a 'Sitra' 40 mph tanker for 20 minutes, more than likely it was when Emily and Emily came into Tindalls and told me how they wanted to design their superhero from - well, the boots up.

'Anything else? Sorry - what did you say? Unicorn horn? - Coming up.'

'What's your character's name going to be?

'Brilliant - of course it is. And what are your names?'


And this was pretty much how the day went.

James came by next with his family and volunteered to create the JAGUAR replete with corinthian Magneto helmet, Wolverine claws and spiked boots!

I think it was James' sister Kate that asked me to draw WONDER WOMAN,
I wasn't quite sure what her costume looked like, but with a little help from Kate's mum we got there in the end.

A heroic thank you to James' dad who when asked to take a picture of me in action at the easel, took plenty of great photos. Cheers!


Just when I think it's all quiet on the western front - in walk Josh and Jenson - all ready to conjure up their inimitable superhero. Plenty of magnets, stripes, metallic boots, shiny knee and elbow pads and an inverted double magnet chest emblem. Watch out McDonald's -

I take a short break for lunch and return in time to meet Daniel. I go off template and modify the characters left hand and foot - and with Deadpool's eyes, Iron Man's repulsor rays and the Flash's trademark lightning bolts we give birth to none other than ...


Normally I work from my design template - more speed and less fear. It's  a good thing I drew a handful of freehand superhero sketches before I went to lunch and got my confidence up. 'Cause that's just what Josh wanted me to do - draw a freehand Hulk picture.

OK - with a pencil I quickly scribbled in a few layout lines starting with the outstretched fists, growing back to his shoulders, barrel chest and then a crouching knees out position. Straight back in with a Winsor & Newton chisel tipped Promarker and before you know it I'm spelling out 'GRRAAAR!' by JOSH in the background, logo style!

THE INCREDIBLE - and quite angry - HULK!

Joe's seen what I'm up to and asks me to draw a picture of SHIELD boss NICK FURY! Being a little bit older than Joe - and a comic collector from the 60s - I have to ask Joe if he means the original Sgt Nick Fury from the 1960s or does he mean Avengers Assemble's Mr Samuel L Jackson?

And yes he does indeed mean - Mr Samuel L Jackson.

...and laser pistol in hand, here he is - the Director of SHIELD - NICK FURY!


It's been pretty much heroes all the way today, but here comes Christopher to change all that. He only wants me to draw one of Spider- Man's baddest bad guys from the late 80s. Almost the very opposite of Spidey himself - the unforgettable VENOM!

Originally a new costume Spidey found on Battleworld back in the original seventies Secret Wars, the costume turned out to have an evil will of it's own, and finding a host of it's own has given Spider-Man a run for his money ever since.

Same as before - a lot of frantic scribbling starting with the claw like hands, down the arms to the chest and then the angular legs and clawed feet.

I was right it was not only a good day, but a great day!

Thanks a lot to all the kids (and superhero fans), that took part and helped me create an unbeatable team of TINDALLS TITANS to rival the Avengers.

Many thanks also to Matt and Mark for inviting me along to take part, and to all the Tindalls Ely staff for their hospitality throughout the day.

Posted by Andy Scordellis at 09:44 No comments: